Waves, an open-source blockchain platform that allows users to launch their own custom cryptocurrency tokens, now affords users the ability to upload arbitrary data to its blockchain.

Posting data to any blockchain is nothing new. Almost every blockchain allows users to post data on it, though most are not designed with this purpose in mind. As such, bloating blockchains is generally discouraged — as is the case with Bitcoin.

Nevertheless, opening up the ability to store strings of data on a platform’s blockchain is absolutely critical for platforms wishing to acquire real-world use cases. Any application with goals to preserve an immutable record of patents, photos, smart contract data, permanent message, etc. requires a built-for-purpose solution.

Waves has just that solution. 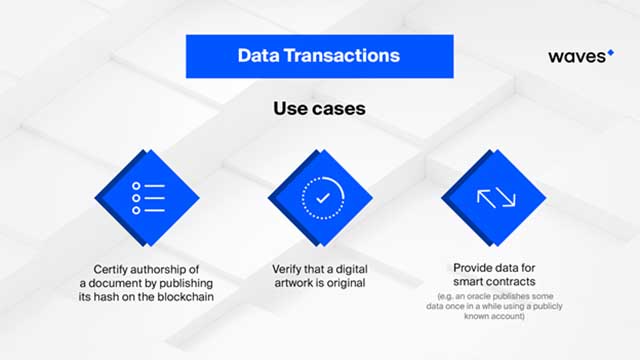 Data transactions essentially allow anyone to post data in different formats to the blockchain and are now crucially supported on Waves’ mainnet.

As explained by the Waves team, each value has a data type associated with it, and four data types are currently supported: boolean, integer, byte array, and string. Further types will likely be added in the future.

Furthermore, subsequent transactions using the same key can overwrite/supersede previous data transactions — though there is no way to erase them.

The Waves team has also revealed:

The maximum size for a key is 100 characters, and a key can contain arbitrary Unicode code points including spaces and other non-printable symbols. String values have a limit of 32,768 bytes and the maximum number of possible entries in data transaction is 100. Overall, the maximum size of a data transaction is around 140kb — for reference, almost exactly the length of Shakespeare’s play ‘Romeo and Juliet’. 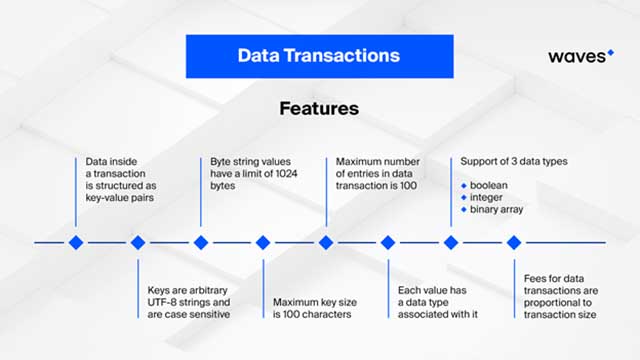 Of course, there are fees – but, with Waves, they’re almost non-existent.

The platform’s team has explained that all fees for data transactions are proportional to the transaction size, rounded up to the nearest kb.

Unsurprisingly, fees are only payable in WAVES tokens – thus, the largest transaction fee possible (140kb) costs a mere 0.14 WAVES, which is currently less than $1.00. That means that a user may post the entire text of Romeo and Juliet to the blockchain for pocket change.

First, there is an update to the PoS system that removes some of the disadvantages for smaller miners. Whilst PoS should allow anyone to receive mining rewards in proportion to their WAVES balance, in practice, the odds are stacked in favor of larger miners, who create a significantly higher share of blocks. The protocol has been adjusted to reflect this and ensure that smaller miners are not pushed out.

Secondly, any user can now burn tokens – that is, destroy them by making them cryptographically unspendable. This allows users who have received spam tokens to remove them permanently from their portfolios.

Additionally, an important update to the protocol is Sponsored Transactions. This functionality allows token issuers to pay tx fees on behalf of users, meaning that it is possible to use Waves tokens without users requiring WAVES (thereby simplifying many mass-market applications).

To learn more about the latest Waves developments, check out the platform’s official social media channels or visit its official website.

Will Waves platform streamline the process of storing data on the blockchain? Let us know what you think in the comments below.